The Ministry of Energy plans to bring forward B7 enforcement and aims to promote establishment of 1 million liter/day BHD biodiesel plants by 2017and targets in a bid to reduce oil palm volatility. 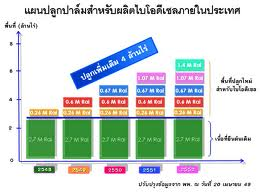 Oil plam is the key material for biodiesel production in Thailand. In 2012, oil palm situation was extremely volatile, with massive output early in the year resulting in sizable exports. However, situation swings around mid-year and the Commerce Ministry had to import 40,056 tons of palm oil. Late last year, ample local output flooded the market again amid a slump in global crude palm oil, preventing local producers to unload their supplies through export markets. Therefore, domestic crude palm oil stock breached above 300,000 tons since October 2012. In February 2013, palm oil stock was at 386,000 tons while price of oil palm also retreated.

To cope with such volatility, the Ministry of Energy has announced the mandatory usage of B5 Biodiesel, or a mixture of up to 5% crude palm oil with diesel, from January 1, 2012. It slashed mandatory mixture of biodiesel to 3.5%-5.0% during July 19 – Oct 31, 2012, before lifting the mixture again from November, 2012 onwards, to 4.5%-5.0%, the highest mixture accepted an guaranteed by automakers that would not have any impact on engines. 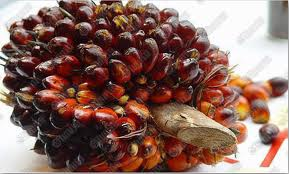 Besides adjustment of biodiesel mixture in accordance to palm oil output, the Energy Ministry has asked all biodiesel plants to increase their palm oil and biodiesel inventory to their maximum levels. It has asked PTT PCL to increase crude palm oil reserve, to be used as material for biodiesel production, by 10,000 tons. The Electricity Generating Authority of Thailand (EGAT) has also been asked to prepare a plan to replace 10% of fuel oil with crude palm oil at its Krabi power plant.

These plans are in line with the government’s policy to promote alternative energy to 25% of total energy consumption by 2021. In 2012, total oil palm plantation area in Thailand stood at 4.5 million rai while the Ministry of Agriculture and Cooperatives encouraged more oil palm plantation and conducted genetic and knowledge improvement of oil palm to continuously increase palm oil output. At the same time, the Ministry of Energy also tried to adjust its plan to suit palm oil output and reduce energy import as well as help farmers.

Moreover, it is also promoting biodiesel production with other technologies such as BHD technology that could mix as much as 20% with diesel without any necessity to adjust diesel standard. Initially, the ministry targets to promote the establishment of 1 million liters/day biodiesel production plant using BHD technology by 2017. However, high investment cost and volatile palm oil output remain key obstacles.

The measures introduced by the Ministry of Energy aim at providing alternatives for domestic palm oil usages during period of high output while help reducing palm oil volatility and energy import.