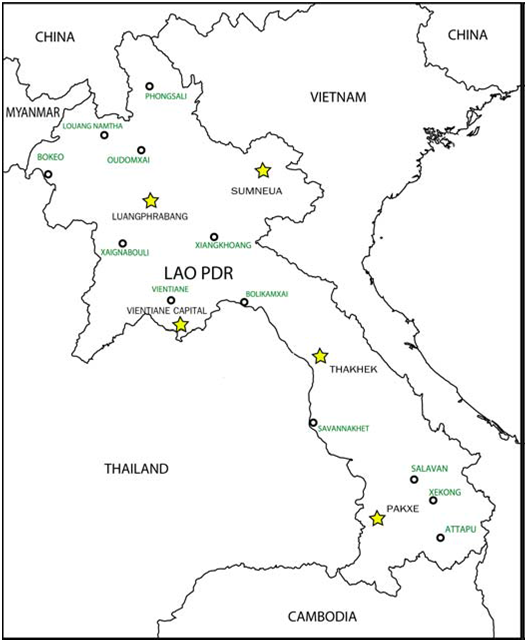 GOES9 satellites were used as input of the model. This model accounted for the

reflectivity of cloud, absorption of water vapour, ozone and radiation depletion by

aerosol. The satellite data provided cloud information for the model. The absorption

from ambient relative humidity and temperature at 17 meteorological stations. The

absorption by ozone. The depletion of radiation due to aerosols was estimated from

and Pakxe. Global radiation measured at these stations was used to validate the

at 3 stations in Thailand: Nongkhai, Nakhon Panom and Ubon Ratchathani. The solar

the measurements, with a root mean square difference (RMSD) of 7.2 %. After the

validation, the model was used to calculate the monthly average daily global solar

radiation for the entire country. The results were displayed as monthly radiation maps

and a yearly map. The monthly maps revealed the seasonal variation of solar radiation

for most parts of the country. From the yearly map, it was observed that the western

parts of the country received high solar radiation with the values of 17-18 MJ/m2-day.

18-19 MJ/m2-day. The yearly average of solar radiation for the entire country was

found to be 15.8 MJ/m2-day. This solar radiation data revealed that Lao PDR has

applications. The maps can be used as a tool for site selection of solar energy

technologies. A solar radiation database was also developed for use in designing solar