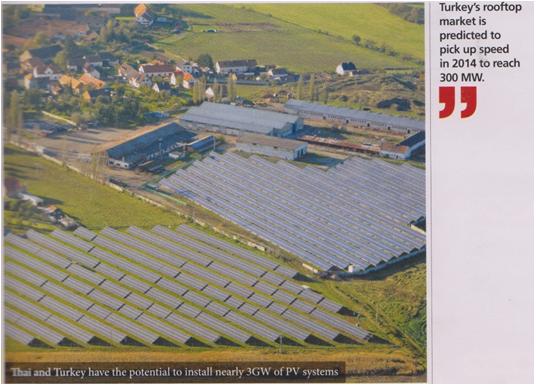 Thailand is in a neck-and-neck battle with Turkey to become the world’s largest solar photovoltaic (PV) market.

According to IHS, the nextbigopportunityfor growth in the global solar business lies in small, emerging markets where PV installations are forecast to rise at about triple the global average from 2012 through 2017.

Annual installations in these emerging countries, IHS says, are expected to increase to 10.9 gigawatts (GW) in 2017, expanding at a compound annual growth rate (CAGR) of 38% from 2.2 GW in 2012

In contrast, the overall global market will expand at a CAGR  of only 13%. The emerging markets will account for 19% of global installations in 2017, up from just 7 percent in 2012.

Of the emerging countries analyzed, IHS said that Thailand and Turkey are expected to become the largest markets in the coming years. Both countries have the potential to install a cumulative total of nearly 3 GW of PV systems during the period.

“ The Thai market has already taken off because of its adder scheme, under which the government pays feed-in premiums to solar power producers. In contrast, the Turkish market is still taxiing toward the growth runway. In June the country experienced an avalanche of applications that far exceeded the 600 megawatts (MW) that had been planned by the government. This has delayed the licensing procedure and pushed back installations until late 2014 and 2015.”

IHS, however, notes that Turkey’s rooftop market is predicted to pick up speed in 2014 to reach 300 MW. By 2017, its annual PV demand, it adds, will climb to 1 GW. “Across the world, new markets for solar PV are emerging, propelled by government incentives, including tenders for large-scale contracts, feed-in-tariff schemes and self-consumption support,” said Josefin Berg, senior PV analyst at IHS.

“Although these markets sometimes have huge hurdles-like limited financing, regulatory uncertainty and opaque local regulatory conditions-companies throughout the solar supply chain can benefit from targeting these fast-growing emerging countries.” 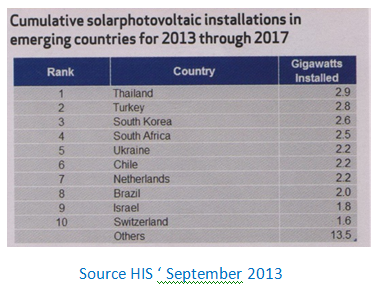