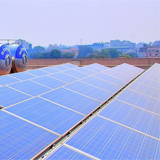 Bangkok New Report analyzes Thailand’s Solar Rooftop Programme
The solar photovoltaic rooftop scheme in Thailand is one of the fastest implemented renewable energy support systems in the world, finds a study just published by the Deutsche Gesellschaft für Internationale Zusammenarbeit (GIZ) GmbH. In July 2013, the Thai National Energy Policy Council decided to implement a solar rooftop policy, for which the Energy Regulatory ommission (ERC) published the implementation regulation in September 2013. Still in September the official call for solar PV rooftop projects was publically announced and the winners were announced in October starting the development of more than 200 MW of commercial and residential rooftop systems. This makes the Thai solar PV rooftop support scheme one of the fastest implemented support programs around the world.

The recently published report “PV Rooftop Development in Thailand - Analysis of Regulations and Challenges” finds that the degree of detail in the regulation and the corresponding notifications is considering a number of aspects, which are usually only addressed in more mature markets and appreciates the outcome of the regulation in such a short time. The report analyses the current administrative framework for the realization of a rooftop solar PV installation making references to international best practices and points out challenges for developers and installers. The report was developed by the consultancy eclareon GmbH in the framework of the Project Development Programme (PDP) South-East Asia. PDP South-East Asia is implemented by GIZ on behalf of the German Federal Ministry of Economic Affairs and Energy in close cooperation with the Thai Department of Alternative Energy Development and Efficiency (DEDE).

Although the Department of Industrial Works (DIW) challenges the position of ERC both sides agreed to strive for a swift conclusion of the pending issue, especially with a view to larger systems. However, for developers of small solar rooftop systems below 10 kW the outlook should be much more sunny already.