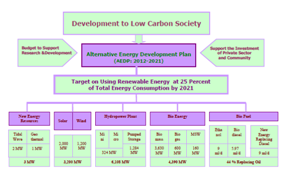 The Department of Alternative Energy Development and Efficiency has conducted an Alternative Energy Development plan (AEDP 2012-2021), aiming to boost alternative energy to 25% of total energy consumption in 10 years. However, it is a real challenge to achieve such ambitious target, given consistency constraints in power generation and relatively higher cost than mainstream energy sources. Therefore, government support is inevitable in order to promote alternative energy.

At present, alternative energy accounts for around 11% of the country’s overall usage. The DEDE targets alternative energy usage to rise to 17%-18% in 2017 and eventually reach 25% target in 2021 as Thailand’s power demand increases by more than 1,000 MW each year in tandem with economic growth.

There have been increases in usages of alternative energy sources in accordance with government promotion, especially in solar power generation. Thailand has a long-term target to boost solar power generation to 3,000MW by 2021, comprising 1,400 MW from solar farms, 800 MW from solar roof tops, and 800 Mw from community solar cells. In the short-run, it aims to drive solar capacity to 630 MW by the end of this year from 529 MW now. The government has encouraged the private sector to install solar cells as well as promoting solar cell installation in remote areas where electricity is not accessible.

On solar power generation, the DEDE will focus mainly on solar roof tops, with a pilot project to install on government buildings nationwide that aim to produce 25 MW by 2014. It targets to drive overall solar roof tops capacity to 200 MW, comprising 100 MW on residential units and another 100 MW on business buildings, to be commercially available by the end of 2013.

The DEDE targets to drive biomass power generation to 4,822 MW in 2021 from 2,200 MW now, with as much as 3,000 MW of the targeted capacity being produced from Napier grass. It has launched pilot projects in three types of area including dry land, wet land, and rice-producing area.  Some THB300 million worth of financial support has been granted to the pilot projects by the Alternative Energy Promotion Fund. The Ministry of Agriculture and Cooperatives is preparing Napier grass plantation zoning.