The Ministry of Energy’s 2013 performance 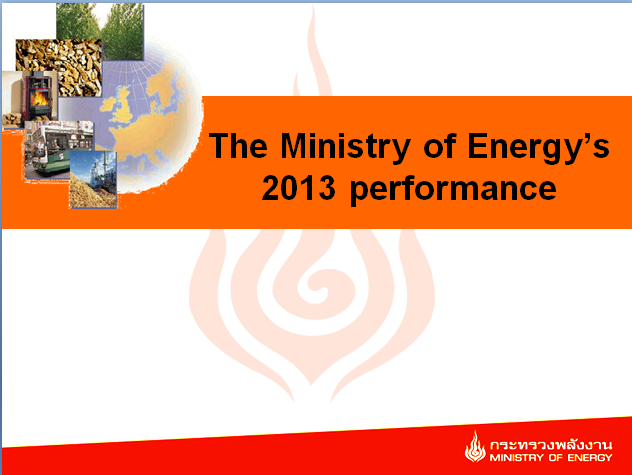 During 2013, the Ministry of Energy has conducted operations in accordance with government policies. Key results include:

In order to increase energy security in the South, the Ministry of Energy has proposed to the National Energy Policy Council on July 16, 2013, a plan to ensure adequate power production to accommodate power demand in the Southern provinces. The NEPC has also assigned the Electricity Generation Authority of Thailand to accelerate projects to develop 500KV and 230KV transmission grid system to enhance power security in the South. It has also reviewed the overall power generation and transmission system development programs to ensure nationwide power security and raise power security in vulnerable areas to prevent risk of any major electricity black out in the future.

Moreover, the NEPC has also approved short-term solution for EGAT to use crude palm oil for power, at 10% volume of fuel oil usage, at Krabi power plant to mitigate fuel oil transportation problem.

On oil pipe line development, the Energy Ministry has commenced a project to study oil pipeline development to facilitate effective oil transportation from oil depot to refineries in various locations, ensuring that retail oil prices will be on similar level countrywide.

The ministry has abandoned sale of 91 octane gasoline since January 1,  2013, leading to an increase in ethanol usage to an average of 2.5 million liters per day.

On Solar PV Rooftop project, the ministry has promoted a combine of 100MW installation on residential units and another 100 megawatts on business buildings and factories.

The community solar farm project has nameplate capacity target at 800 MW while commercial operation date is expected within 2014.

The Energy Ministry has also conducted a 20-year energy conservation action plan, targeting to reduce energy consumption in the industrial sector by 16 million tons of oil equivalent, in business buildings and residential units by 7 million tons, and in the transportation sector by 15 million tons.

The ministry has implemented aiding measures for low-income earners to cope with the price restructuring of Liquefied Petroleum Gas (LPG) to better reflect actual cost, which led to gradual increases of THB0.50/Kg. in retail LPG price for the household sector since September 1, 2013 until it reaches actual cost at THB24.82/Kg. The price restructuring is essential in creating fairness for oil consumers as it will reduce subsidy burden of the state’s oil fund, correct misuse of fuel, LPG smuggling to neighboring countries, reduce price distortion and prepare for the upcoming establishment of ASEAN Economic Community.

Furthermore, it has also implemented measures to prevent and arrest malpractices in LPG distribution, resulting in lower LPG consumption in the household sector, and the restructuring of ex-pipeline natural gas price to expand Natural Gas for Vehicles (NGV) service.