Napier Grass is the latest energy crop being promoted by the Thai government. DEDE has poured in over THB350 million worth of research budget and targets to produce as much as 3,000MW electricity from Napier Grass. 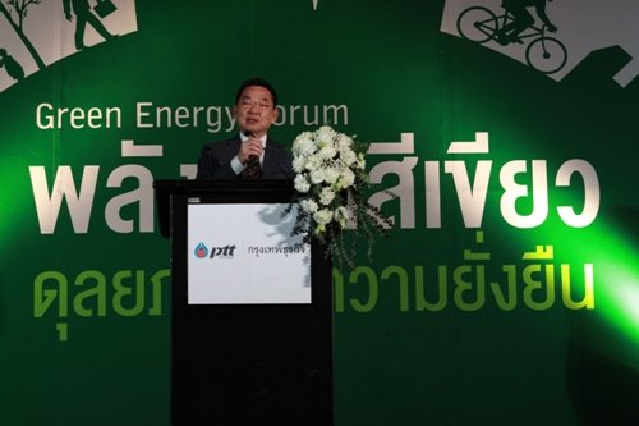 Although it may be a rather new energy crop, it is no stranger to Thai farmers as it has been planted locally for over 30 years, with over 130 species. However, only three species have been popular among local farmers comprising Napier Grass, King Grass, and Mott Dwarf Elephant Grass.

However, the specific specie that suits best as energy crop is Pakchong 1, harvestable 5-6 times a year and yield as much as 70-80 tons/year/rai, almost seven times more than other grasses.  Its nutrition structure fits for microbe to grow and generate methane gas. Napier grass can generate bio gas generation at 6,860-7,840 cubic meters/rai/year that can produce Compressed Bio Gas with heating value of 14-18 MJ/kg, replacing usage of NGV by 3,118-3,563 Kg./year.

After reaping and fermenting the age of 60-day old fresh Napier grass, the anaerobic digestion process will result in bio gas. One metric ton of Napier Grass can generate 90 cubic meters of bio gas, convertible in to 170 KW/day electricity.

The Ministry of Energy’s Department of Alternative Energy Development and Efficiency has run projects promoting bio gas production from Napier Grass for the purpose of generating electricity, cooking gas, and bio gas for vehicles. It has supported study, research, and prototype projects on green community energy from energy crop (bio gas) using 20% of prototype budget while it has earmarked total budget of THB350 million over the 54 months period. The Department aims to promote collaboration of farmers in the form of community enterprises or agricultural cooperatives to plant energy crop with contracts to sell their output to bio gas plants. The produced bio gas can be used to generate electricity, CBG, or as LPG substitute.

Moreover, the Department has also promoted prototype projects on Napier Grass plantation in three types of area including dry land, wetland, and sub-standard rice plantation area in 10 communities. Each community plants 1,000 rai of Napier Grass to produce 1 MW of electricity on around-the-clock production rate for 330 days. Farmers reap more than THB3,500/rai/year profit from energy crop plantation under the prototype projects, relatively higher than income from usual farm crop with no exposure to price fluctuation.

The overall project aims to promote as much as 10,000 rai Napier Grass plantation to produce 10 MW electricity, with the construction expecting to be completed in 2014. To achieve the 3,000MW 10-year plan target of electricity generating on Napier Grass, plantation area is estimated at 3 million rai and if Napier Grass is to also be used to produce CBG and as LPG substitute, more plantation promotion is also required. 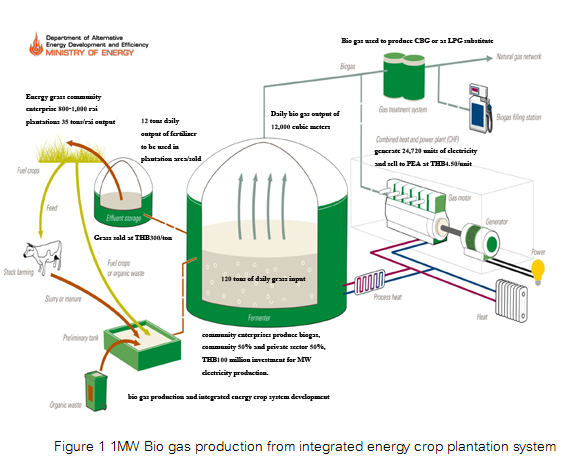 Figure 1 shows the bio gas production from integrated energy crop plantation system for 1MW electricity. Each plant will require 800-1,000 grass plantation area that yield 35-40 tons/rai/year, with a guaranteed buying price of THB300/ton. The Napier Grass will be mixed with organic waste and slurry or manure in primary tank before being put in fermentation tank that can accommodate 120 tons of grass a day, generating 12,000 cubic meters of bio gas daily. Some 30% of the bio gas output will be used to generate 24,720 units of electricity, which the PEA will purchase in the form of feed-in tariff at THB4.50/unit, while the remainder 70% will be used to produce CBG. Moreover, waste water from fermentation tank will be drained to effluent storage, generating another 12 tons of fertilizer daily worth around THB2,000 a ton. Under the scheme, farmers, through community enterprises, and the private sector, or bio gas production plant, will each invest 50% in the THB100 million worth of 1MW power production project, which will be subsidized by up to 20%, or THB20 million, by DEDE. At the electricity selling price of THB4.50/unit, THB2,000/ton of fertilizer, and 7.25% annual interest rate, the Internal Rate of Return (IRR) is projected at 12%, with 6-year break even period. 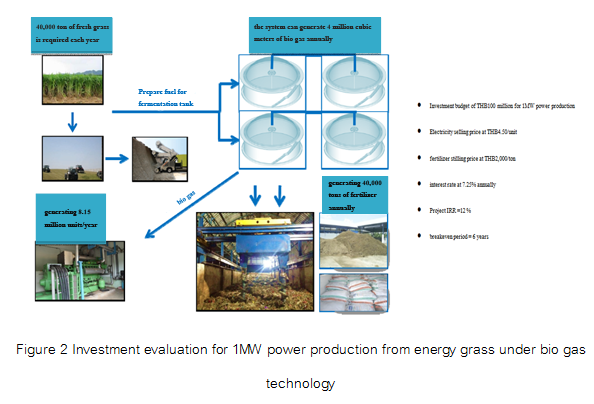 Napier Grass is considered to be the fresh energy crop to be used in power and CBG production, with great potential. It has yet to be seen if the promotion would be expanded into other species or should more plantation area be promoted.