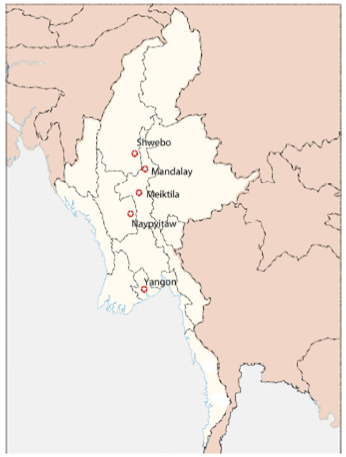 This project was carried out under the collaboration on renewable energy

and energy conservation between Thailand and the Union of Myanmar.    The

project was organized by Department of Alternative Energy Development and

Efficiency (DEDE), Thailand and Department of Meteorology and Hydrology

together with Department of Energy Planning of the Union of Myanmar, Solar

Energy Research Laboratory of Silpakorn University, Thailand was invited to

carry out the project. The main objective of this project is to investigate the solar

energy potential of the Union of Myanmar. In investigating the solar energy

potential, solar radiation incident on the entire area of the Union of Myanmar was

used as an input of the model. The scattering and absorption of solar radiation due

to clouds, water vapour and ozone, and the depletion of solar radiation by aerosols

were also accounted in the model parameterization. The reflectivity data obtained

from the satellites provide cloud information to the model. The absorption of solar

radiation due to water vapour was computed from precipitable water data. The

the absorption due to ozone. The depletion of radiation due to aerosols was

estimated from visibility data and the 5S radiative transfer model. For the model

validation, solar radiation monitoring stations were established at 5 locations in

calculated from the model. In addition, the comparisons were also performed with

the measurement data collected from 10 stations in Thailand. These are Chiang

in good agreement with a root mean square difference (RMSD) of 8.9 %. After

the validation, the model was used to calculate monthly and yearly average daily

energy potential maps. The monthly maps show that the seasonal variation of

solar radiation is mainly affected by the monsoons and local geography. High

solar radiation is observed from February to May for most parts of the country.

From the yearly map, it can be seen that the central plain of the country including

radiation (18-22 MJ/m2-day) for almost the whole year. The yearly average of

solar radiation for the entire country was found to be 18.3 MJ/m2-day. These

results indicate that Myanmar has a relatively high solar energy potential, which

can be utilized for various solar energy applications. Finally, a solar radiation