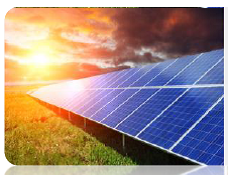 The Royal Thai Government is making further steps to increasing the share of renewable energy in the country by tapping Thailand’s abundant solar potential. On 16th July 2013, the National Energy Policy Commission (NEPC) approved two policy packages increasing Thailand’s target installed Photovoltaic (PV) capacity by 1,000 MW to a total of 3,000 MW. Since applications under the known adder-tariff-scheme (feed-in premium) for solar projects are no longer accepted by the Thai Government, these policy packages reopen support for solar power in Thailand.

The first package announced is a policy scheme to support the deployment of rooftop PV in Thailand. This is a new development, since the Thai PV sector has – until now – been dominated by large free-field installations under the adder-scheme. According to the Ministry of Energy, the scheme is meant to encourage private and community investments, minimize peak load and contribute to energy security in Thailand.

Thailand’s Energy Regulatory Commission (ERC) published the Rules and Regulation in the first two weeks of September 2013. GIZ provides an unofficial translation of the document, which is available here: http://www.thai-german-cooperation.info/download/20130918_giz_translatio...

The rooftop package has a total quota/target of 200 MW, which is further distributed as shown in the table below. Out of this 200 MW, 80 MW are allocated to be installed in three provinces namely Bangkok, Nonthaburi and Samut Prakarn (40 MW of which residential and 40 MW commercial). Applications for these systems will be taken and processed by the Metropolitan Electricity Authority (MEA), while for all other applications, the Provincial Electricity Authority (PEA) will be the focal point handling the applications (the breakdown of the quota to the different provinces can be taken from the Rules and Regulation).

There will be a full feed-in tariff granted for the duration of 25 years starting from the scheduled commercial operation date (SCOD). According to the regulation, the SCOD for all rooftop systems must not be later than December 31, 2013. According to informal discussions with ministry officials, it can be expected that the target of 200 MW could be increased in 2014, possibly with a lower feed-in tariff.

Applicants who wish to install solar systems will have to hand in applications with PEA or MEA from Monday 23rd September 2013 to Friday 11th October 2013 during 09:00-15:00h. Furthermore, installers wanting to set up PV rooftop systems will have to be certified by and registered with the Department of Alternative Energy Development and Efficiency (DEDE) or a person with relevant license for professional  practice (see Annex 7 or the Rules and Regulation).

While the rooftop programme has been determined, the Rules and Regulation for the second package are still under development. With this initiative, the Ministry of Energy continues its community-based approach and efforts to generate local value, create job opportunities and trigger new income channels for the local communities. The package contains a special feed-in tariff for community-based ground-mounted solar systems with a quota/target of 800 MW. Individual projects are expected to be about 1 MW in size. Projects realized under this scheme will require an SCOD by December 31, 2014. While the details of the regulation are still in the making, first informal information

from the Ministry of Energy reveal a special concept on how the community-based approach shall be implemented. In Thailand, the National Village and Urban Community Fund Office is a local development organization, which provides loans/grants to villages and communities of which certain set-asides shall be foreseen for solar projects. Since the financial means one village receives from the fund are not enough to provide for the equity of a 1 MW solar installation, a special committee will manage bundling grants to individual villages to pool available means. It is expected, that about 60 villages would need to cooperate to provide the (assumed) equity share of 15 million Thai Baht (355T Euro) for one project. The debt share (estimated by the Ministry of Energy at about 45 million Thai Baht (1.065T Euro)) shall come from two national banks which are the Bank for Agriculture and Agricultural Cooperatives (BAAC) and the Government Savings Bank (GSB).

The returns from the project – in the form of the feed-in tariff outlined below – will go directly to the group of villages that have invested in the installation. The solar electricity produced will be fed to the public grid and remunerated with fixed prices. The target of the Ministry of Energy is to have the debt share repaid after approximately 6-8 years. During the remaining time for which the tariff is granted, the funds would go directly to the villages. 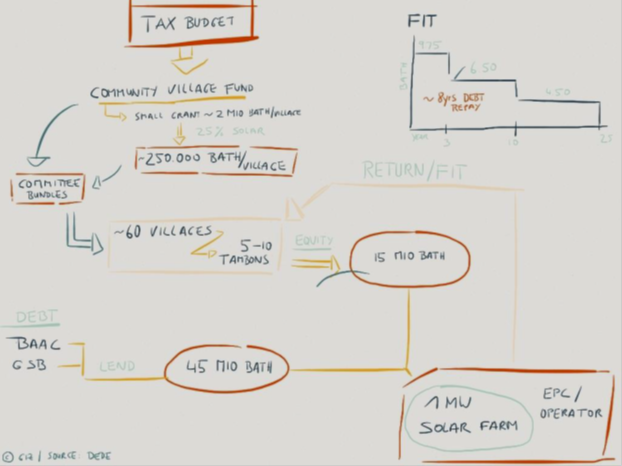 The additional 1,000 MW solar capacity announced in the NEPC Resolutions increase the solar power target of the Alternative Energy Development Plan 2013 (AEDP) to 3,000 MW. It was originally set at 2,000 MW in 2012. Tracing back to the Renewable Energy Development Plan 2008, the figure of 3,000 MW has risen from 500. Not only is the target for solar energy increased, but also the figures for other alternative sources of power. The detailed figures are shown in the table below:

The information provided has been gathered in the context of the Renewable Energy Project Development Programme (PDP) South-East Asia. The programme is implemented by the Deutsche Gesellschaft für Internationale Zusammenarbeit (GIZ) GmbH on behalf of the German Federal Ministry of Economic Affairs and Energy. This fact-sheet is published as part of a series to disseminate and promote viable renewable energy business opportunities in South-East Asia. Liability claims through the use of incorrect or incomplete information are excluded.