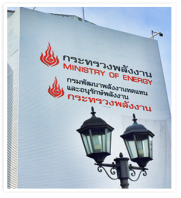 Founded as “National Energy Authority” under the Prime Minister's Office, and temporarily located at Faculty of Engineering, Chulalongkorn University. In 1954, the Office was moved to Sala Luk Khun in the Compound of the Royal Grand Palace.

Transferred to be under the Ministry of the National Development by the virtue of the Ministry, Bureau, and Department Improvement Act B.E. 2506 (1963).

Transferred back to the Prime Minister's Office and titled as the "National Energy Administration" (NEA).

Transferred to be under the Ministry of Science, Technology and Energy.