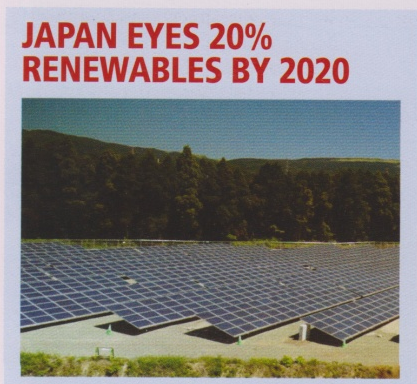 The solar industry in Japan is set to shine brightly while nuclear power remains on the ropes. juwi Shizen Energy has realized its third solar project in Japan. In Ozu on Kyushu island the joint venture between the German juwi group and the Japanese company Shizen Energy has recently commissioned a free field solar park. The utility scale solar power plant has an installed capacity of 1.1 megawatt (MW). Every year the 4,480 solar modules feed 1,375,000 kilowatt hours (kWh) of climate-friendly electricity into the local grid. This equals the electricity consumption of more than 380 local households. For juwi Shizen Energy it is the third solar project on Kyushu island. The company’s first project, a solar power plant with an installed capacity of one MW, already produces clean electricity for 300 local households.

juwi Shizen Energy also constructed utility scale roof top photovoltaic (PV) systems. In Kumamoto the company recently connected the rooftop PV plant “Bear2” to the grid. The system consists of 4,088 solar modules and the company claims that it was erected within only four weeks. It has a capacity of one MW and produces one million kilowatt hours (kWh) of clean energy per year: enough to supply 300 local households.

All eyes on renewable energy

Japan is currently dramatically expanding its renewable energy sector as it aims for 20% renewable in 2020. Solar, wind, biomass and geothermal energy still account for just 1% of Japan’s power capacity. Therefore, the Land of the Rising Sun has introduced the world’s highest feed-in-tariff for solar power. According to experts, Japan is now one of only five countries that have achieved 10 gigawatts of cumulative solar photovoltaic capacity. The country’s PV market in Japan broke the 10 GW barrier in August of this year and reached 10.5 GW at the end of August.

Meanwhile, JAG Energy Group, a unit of the Japan Asia Group have been contracted to build a 13 MW, 14.3 hectare solar park in Kanagawa as part of Kanagawa prefecture’s Smart Energy Initiative. A 19.6 MW solar power project SoftBank Izumiotsu Solar Park is also being built by SB Energy in Osaka, Japan.

The project, set to be the biggest in Osaka, is a joint venture between Kyocera Group, subsidiary Kyocera Solar and Mitsui & Co. and is being developed on nearly 25 hectares of prefectural government land. Approximately 80,000 Kyocera solar modules will be used, which is expected to generate around 20,680 MWh of electricity each year.