“Biogas” a production made from the fermentation of biodegradable materials such as sewage, manure, waste water from live stock farms and industrial plants.

“Biogas” is produced by the anaerobic digestion of organic substances with anaerobic bacteria in the absence of oxygen (anaerobic condition). It can be produced from waste such as manure, sewage, waste water from live stock farm and industrial plant, as well as agricultural waste. Biogas comprises of 60%-70%methane (CH4), 28-30% carbon dioxide (CO2), and around 2% of hydrogen sulphide (H2S), nitrogen (N2), and steam.

The property of biogas depends largely on the quantity of combustible methane while the amount of carbon dioxide has no impact on the biogas property due to its lacking of combustibility. Organic substances that are typically found in waste include protein, carbohydrate, and fat compound, both in the forms of solid and solution.

The digestion process of organic substance involves four steps including:

1 Hydrolysis: Large-molecule organic compound with complex structure such as carbohydrate, fat, and protein will be decomposed into small-molecule compound with simple structure that is soluble in water. Acid-forming bacteria are used as catalyst for the decomposition.

4 Methanogenesis: The formation of Methane from Acetic Acid, Carbon Dioxide, and Hydrogen by Methane-forming bacteria.  There are two types of Methane formation process. The first is formed through the transformation of Acetic Acid into Methane, accounting for around 70% of overall generated methane.  The second is formed through the combination of Carbon Dioxide and Hydrogen into Methane. 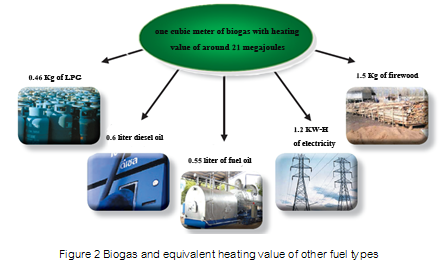 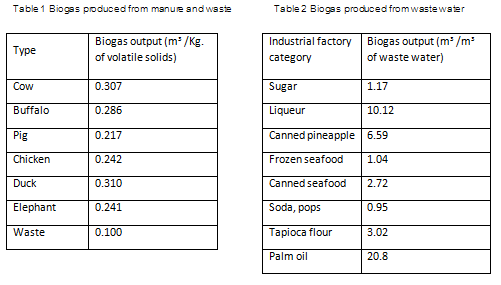 Remark: Data presented in this article is provided by the Department of Alternative Energy Development and Efficiency